Triassic Fossils of the East Coast: The Long-Necked Reptiles

Here's another article I wrote for the Spring 2017 issue of Tracks and Trails, The Dinosaur State Park newsletter.

First a little introduction. In the Connecticut Valley, the majority of fossils are trackways. Bones and body fossils of large tetrapods are quite rare with a few exceptions such as the partial remains of Podokesaurus, a Coelophysis relative found near Holyoke, Mass, and the hand and hip bones of the early prosauropods Anchisaurus and Ammosaurus (there are, however, abundant full-body fossils of Jurassic fish, but that's an article for another time).

Tetrapod bones have, however, been found in a number of other Triassic-Jurassic rift valleys along the East Coast. Since these valleys all date from the same time period- during the break-up of Pangea- it is highly likely that these creatures also inhabited the Connecticut Valley.

There are a lot of interesting fossils along the Atlantic Coast, but I only had so much space for the article. So I decided to spread it out into several pieces covering groups of related animals.  This first article talks about the Tanystropheids, a diverse group of reptiles with unusually long necks.

I also did a couple black-and-white illustrations of the creatures I talk about. It's nice to finally be getting back to some paleoart after such a long hiatus.

TRIASSIC FOSSILS OF THE EAST COAST: THE LONG-NECKED REPTILES
by John Meszaros

The Triassic period can be thought of as a time of “evolutionary experimentation”. The preceding Permian Age ended with a massive extinction event- the largest known extinction in Earth’s history, in fact- that wiped out ninety percent of life on Earth. In the wake of this Great Dying, innumerable ecological niches were left vacant. Life evolved to take fill these gaps, often in forms that seem bizarre to us in the modern day.

Although evidence of Triassic life is rare in Connecticut, fossils from other sites along the East Coast of North America allow us to construct a reasonably accurate picture of the animals that would have lived here. Dinosaur State Park’s Triassic diorama and its accompanying background painting by William Sillin depict a few of these prehistoric creatures: the crocodile-like Rutiodon; the giant amphibian Metaposaurus; bearded dragonesque Hypsognathus; pig-nosed Stegomus and the early dinosaurs Coelophysis and Sileasaurus. These are but a small sample, however, of the unique and unusual Triassic beasts lying buried in rocks all along the Atlantic coast. 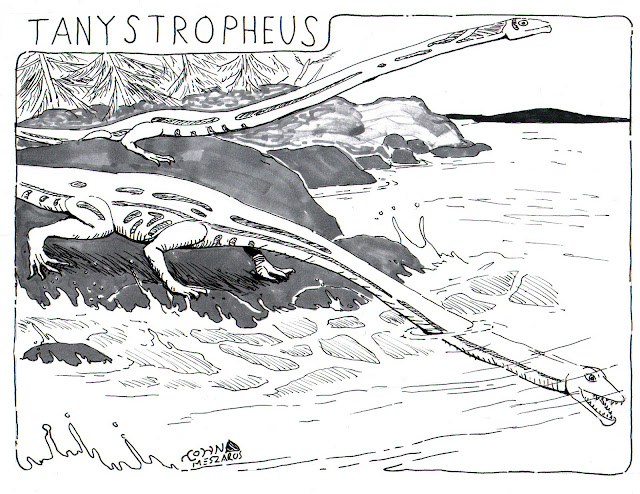 One of the more distinctive reptiles of the Triassic was Tanystropheus (Greek for “long vertebrae”). Sometimes described as a “living fishing pole”, this creature was characterized by its extremely long neck- at 10 feet, it was longer than the rest of the animal’s body and tail combined. Despite this length, however, Tanystrophus's neck had only 12  elongated vertebrae. The exact reason for this strange anatomy is not known, but since fossils of Tanystropheus are usually found near marine sediments, it is speculated that the animal hunted for fish from the shore by dipping its head and neck into the shallows.

Tanystropheus bones are known primarily from Europe, the Middle East and China. However in 2014 paleontologists Paul Olsen and Hans-Dieter Sues described the discovery of a single Tanystropheus neck vertebra from the coast of Nova Scotia along the Bay of Fundy, thus establishing the presence of these reptiles on our side of the Atlantic. This is actually not that surprising considering that during the Triassic the lands that would become North America and Europe were close together within the super-continent Pangea.

In contrast to the single Tanystropheus bone from Nova Scotia, fossils of its smaller cousin, Tanytrachelos, are abundant 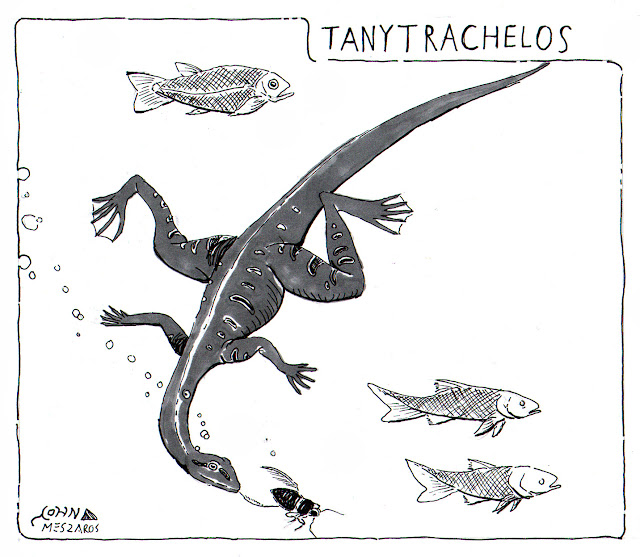 in fossil sites along the East Coast- primarily in the Solite Quarry of Virginia. Nine-inch long Tanytrachelos resembled a long-necked lizard with powerful webbed hind legs that it used to kick-swim in a frog-like manner through the shallow lakes of the Triassic rift valleys. It likely fed on aquatic insects, which are themselves abundantly preserved in fine detail at the Solite Quarry.

Tanytrachelos is thought to be the maker of a type of fossil footprint called Gwyneddichnium, found abundantly in Triassic sandstones from Pennsylvania. It is, of course, not possible to determine exactly what creature made these tracks- just as it is not possible to say definitively that Dinosaur State Park’s own Eubrontes tracks were made by Dilophosaurus. However, the foot structure of Tanytrachelos is a close match to Gwyneddichnium, making it- or a very similar reptile- the most likely candidate. 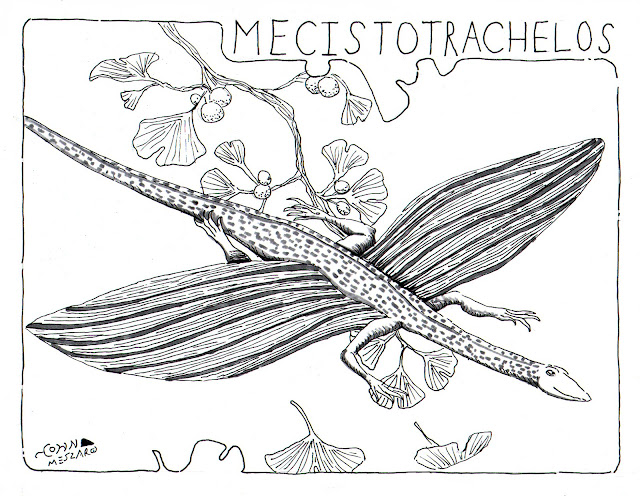 The same Virginia quarry where Tanytrachelos fossils are so abundant has also yielded fossils of another possible Tanystropheus cousin, the gliding lizard Mecistotrachelos . This creature lived among the boughs of the ancient forests, hunting insects and sailing from tree to tree on wings formed from elongated ribs much like those of the “flying lizard” Draco volans of South-east Asia.
Mecistotrachelos shared the Triassic skies with a number of similar wing-ribbed gliding reptiles, including Kuehneosaurus (known from fossils found in southwestern England) and Icarosaurus (known from a single specimen unearthed in New Jersey). It differed from these other gliding lizards in a few ways. For one thing, it had an elongated neck similar to Tanystropheus- though it’s neck was much less exaggerated than the “fishing rod” of the latter animal Mecistotrachelos also appears to have had better maneuverability in the air than its contemporaries. The base of the first wing-ribs were significantly thickened- much thicker, in fact, than the leading ribs in other gliders. This suggests that they may have been anchors for strong muscles that would have allowed the creature to flex its wings, giving it the ability to bank and alter its direction as it descended.

Mecistotrachelos is notable for being the first fossil to be analyzed with a CT scanner- a necessity since the skeleton was too delicate to be removed from its stony grave through typical paleontological procedures.

Though none of the species  discussed here have yet been found in the Connecticut Valley, as was said before, the presence of these fossils in other East Coast fossil Triassic river valleys gives good evidence that frog-like Tanytrachelos once swam the waters of our state in the shadows of the predatory phytosaurs whilst wing-ribbed Mecistotrachelos glided through the gingkos and conifers along the shores. And where the rivers met the sea, it is quite possible that there were Tanystropheus dipping their fishing-pole necks into the surf to snap up fish.

Window Into The Jurassic World by Nicholas G. MacDonald

Dawn of the Dinosaurs: Life In The Triassic by Nicholas Fraser, illustrated by Douglas Henderson

Last Days Of Pangea: In The Footsteps Of Dinosaurs by Daniel T. Ksepka and Kate Dzikiewicz
(This is a slim informational booklet to accompany an exhibit on Triassic fossils at the Bruce Museum in Greenwich, CT)

An article on Mecistotrachelos from National Geographic