Here's another article I wrote for Tracks and Trails, the newsletter of Dinosaur State Park in Rocky Hill, Connecticut. This is part of an ongoing series about Mesozoic animals that inhabited Connecticut and other parts of the East Coast. I've also written about pseudosuchians, tanystropheids, and an unusual little reptile with a particularly strong bite.

You can also check out the articles I've written about Edward Hitchcock, the Founder of Ichnology, along with a poem he wrote about fossil footprints. And here's one about an eccentric fossil-collector and polymath from Connecticut, And one about a partially-complete mastodon skeleton.

OTHER BEASTS OF THE TRIASSIC
By John Meszaros

In the Connecticut Valley, we are fortunate to have a pretty extensive record of Mesozoic life in the form of trackways.  Skeletons and other physical remains, on the other hand, are extremely rare. Fortunately, bones from dinosaurs, crocodile-relatives and other reptiles have been found in other rift valleys along the East Coast in New Jersey, Virginia and the Carolinas.  Since these rifts formed at the same time as the Connecticut Valley, it’s highly likely that prehistoric animals from these locations would have also lived in our state.

The following creatures are just a small sample of the diverse life that would have walked the rivers and lakes of Connecticut in the age of dinosaurs. 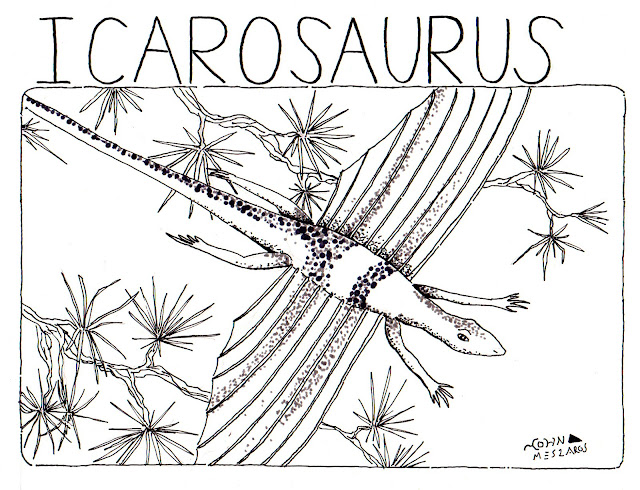 Icarosaurus
This odd, palm-sized lizard sailed through the Triassic treetops, held aloft by fan-shaped “wings” formed from membranes of skin stretched over its elongated ribs. Icarosaurus was not a true flyer, but rather a glider like the “flying” squirrel of North America or the Draco lizard of South Asia. Icarosaurus was just one of a group of insectivorous lizards called kuehneosaurs that used their skin-flap wings to sail through the open canopy of the Triassic forest.

The only known specimen of Icarosaurus was discovered by three amateur fossil hunters in a New Jersey shale quarry just West of the Hudson River Palisades. 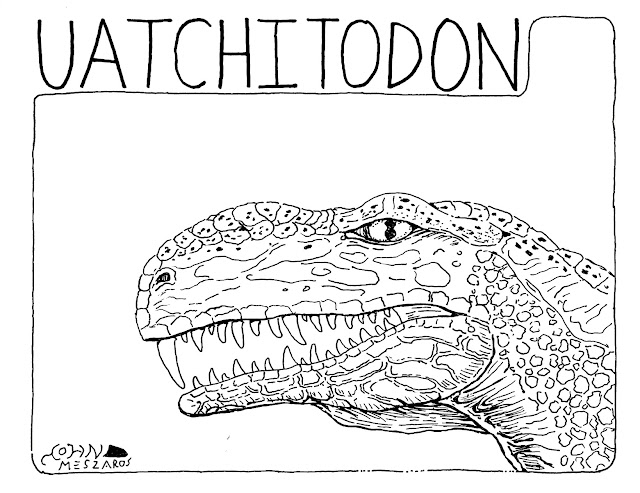 Uatchitodon
While the infamous venom-spitting ability of Dilophosaurus is purely an invention of Hollywood and Michael Crichton, there was at least one venomous reptile in the Mesozoic. Found in Triassic rocks from North Carolina, Virginia and Arizona, the pointed fossil teeth of Uatchitodon possess distinctive grooves running down their sides. Grooves that bear a remarkable resemblance to the venom-delivering canals found in modern-day cobras and Gila monsters. Like these reptiles, Uatchitodon probably injected venom into its prey with a quick bite.

Uatchitodon is currently only known from fossilized teeth. The animal’s appearance and even its relationship to other prehistoric reptiles is unknown. Though rather than being a lizard or a snake, it is thought to be a member of the archosaurs- the group that contains dinosaurs, crocodiles and modern birds. 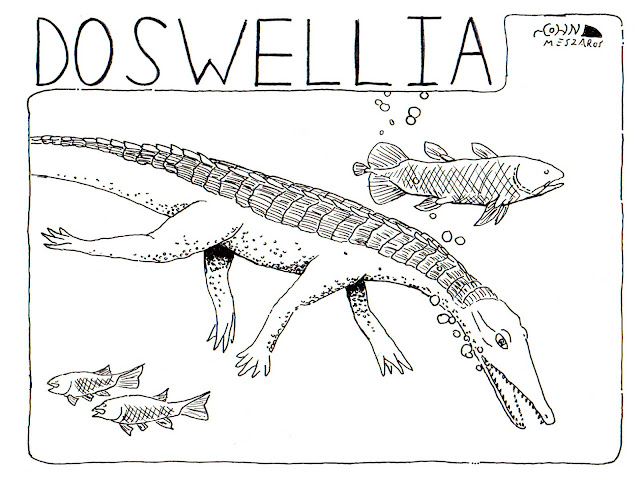 Doswellia
Today, the ecological niche of semi-aquatic ambush predator is dominated on every continent by the crocodilians. But this has not always been the case. In the late Triassic the top ambush predators of Connecticut’s tropical rivers were metaposaurs and phytosaurs. But prowling the rivers even before these two was a greyhound-sized reptile called Doswellia.

With its long, narrow snout, flattened, boxy body and armored back, Doswellia bore an uncanny resemblance to a modern crocodile, though it was not closely related to this group at all. Instead, Doswellia is believed to have been a sister group to the archosaurs as a whole.

Doswellia’s narrow snout and conical teeth- perfect for grasping slippery, wriggling prey- indicate that it was primarily a fish-eater.

Fossils of Doswellia were originally discovered in Virginia, with another separate species later unearthed in New Mexico.

Mitchell, Jonathon S. et al. (2010) Grooves to Tubes: Evolution of the Venom Delivery System in a late Triassic "Reptile", The Science of Nature.

Ponce, Denise A., et al. (2017) The Osteoderm Microstructure in Dosweliids and Proterochampsids and its Implications for Palaeobiology of Stem Archosaurs, Acta Palaeontologica Polonica 62(4): 1-13